For other instances, see Uncle Grandpa.

Uncle "Larry" Grandpa is the main Protagonist of the series Uncle Grandpa. He is everyone in the world's uncle and grandpa at the same time. He goes around helping children who have usually never heard of him. The children do not appreciate his help at first, but then realize the great adventures they have with him. He is voiced by Peter Browngardt.

He is a short, older adult who wears black overalls with rainbow shoulder straps, a white collar shirt, and a blue propeller hat that sits on top of his head (which has a prominent lump). He also has a brown mustache, with a tooth sticking out of it, and a large chin. He also wears a talking red fanny pack, known as Belly Bag.

Uncle Grandpa is very cheery, and is for the majority of the time happy. He likes to help others, especially his friends, and mainly helps kids around the world. Uncle Grandpa seems to have a different array of magical powers, that range from time travelling to making clones of himself. Uncle Grandpa is always using these magical powers, with the assistance of his Belly Bag of course. At first Uncle Grandpa's plans seem dumb, but in the end his plans work out in his favor and he (not) always gets the job done.

Uncle Grandpa and Belly Bag's Room is a real zany room filled with lots of neat toys and accessories that Uncle Grandpa periodically collects over time. The two sleep in Uncle Grandpa's race car bed (Belly Bag is usually strapped to a pillow, as seen in Bottom Bag). There's usually a gumball machine a hot dog poster and a sword seen in any episode that features their room. His bedroom is the most zaniest bedroom in the entire RV.

Giant Realistic Flying Tiger is one of Uncle Grandpa's best friends and also acts as a form of transportation for him when he is not using the RV. Whenever him and the others get into some serious trouble, she is usually the one to come and clean up their mess.

Uncle Grandpa helped out Charlie just like he would do with any kid he helps out. At first Charlie was confused to see someone like Uncle Grandpa, but he grew to like him just like the rest of the gang. Uncle Grandpa and the others decided to help Charlie in his time of need and later on in Charlie Burgers, he sacrificed his ball to save everyone from going into the black hole. Charlie helped Uncle Grandpa when his nose was puffed up like a beach ball in Uncle Grandpa Retires and Uncle Grandpa thanked him.

Uncle Grandpa and Beary never really interacted in any episodes. In Haunted RV, Uncle Grandpa was trying to get Beary's attention when they met him as if they knew each other for a while. Beary may live in the RV as he was found throughout the episode.

Samantha is Uncle Grandpa's laser hammer which he uses in various episodes such as Locked Out and Sick Bag. Samantha is usually stored inside Belly Bag so he can use it any time he wants.

Uncle Grandpa's nemesis who tries her best to make Uncle Grandpa obsolete at helping children. She has taken the role of "Aunt Grandma" and the way she usually helps kids is to solve their problems at the source instead of going on an adventure. Uncle Grandpa and Priscilla hold a negative relation towards each other since Uncle Grandpa failed to help her in the 90's, Uncle Grandpa was trying to teach her that all work and no fun was no way to live a life. The two even had a huge fight after Priscilla snapped at Uncle Grandpa.

Uncle Grandpa is the main cause to Crazy Baby's existence. In Driver's Test, When Mary couldn't shift into reverse while parallel parking, so Uncle Grandpa tried to help and accidentally unleashed Crazy Baby. into the world. Crazy Baby is easily angered and doesn't seem to like Uncle Grandpa very much.

Uncle Grandpa has the ability to make clones of himself. His clones only appear without showing how he made them. So it is unknown how he does it. Uncle Grandpa has shown to had the ability to remove parts of his body and make them move on their own. He has removed his head from his body and seems to have a large variety of other heads and bodies of himself in his room. He has also been seen removing his nose in the episode "Belly Bros" and has been seen with a drawer full of noses in his room too. Uncle Grandpa has also been shown to have wizard powers in the episodes "Belly Bros" and "Tiger Trails". Uncle Grandpa will put on a wizard hat and cloak, and can make lightning come out of his hands. 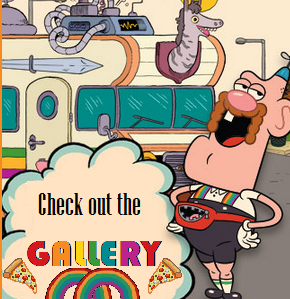